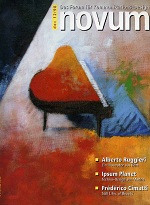 When in 1995 in Rome satirical illustrations in a wild painting style appeared in an unusual advertising campaign for the Banca di Roma (novum 11/96) it was not long before many clones started to appear round the city, mostly from local service providers. The “originals”, which have won many prizes, came from the studio of Alberto Ruggieri.

In just a few years this young Roman has carved out a niche for himself among the small garde of Italian illustrators. His pictures interpret the articles of respected journalists, the magazines Liberal trust him to design title pages and the city authorities in Rome use his pictures to advertise the summer arts programme of the “Estate Romana”
Sometimes loud and spontaneous, sometimes harmonious and restrained, Alberto Ruggieri’s pictures are made using a range f painting techniques, the choice depending on what he feels suits the particular theme. He draws inspiration from a huge shelf full of books on art and illustration spanning all styles and directions. “I my change my preferences from time to time, but I like them all – from Mattotti to Topor. Even if they are exact opposites to each other, all their work has one thing in common – the essence of illustration. This essence arises when a good idea is put into practice, in the sense of a story realised in an artistic way.”